A gift that requires me to drink Scotch?  Well, there’s worse things in life…

I attended a tasting class hosted by the Summerhill location of the LCBO here in Toronto, which was focused on on Highland single malts.  They host a number of these events, scheduled by season, and focusing on topics related to wine, beer, cooking and, of course, whiskey.  The host advised us that he was rather new to scotch tastings (he was more of a wine presenter), but you could have fooled me.  The man knew his whiskey!

After a brief introduction to the general distillation and aging process involved in making scotch, it was off to the main event… The tasting!

The focus of the evening was to highlight the sheer size of the Highland region, and the broad variety of flavour profiles that come from the regions distilleries.  For those unfamiliar with Scotch producing regions, Scotland is traditionally divided into four regions: Highlands, Lowlands, Islay, and Campbeltown.  The Speyside region, which was historically a subregion of the Highlands, is now generally referenced as its own fifth and distinct region, due to the large number of distilleries there. 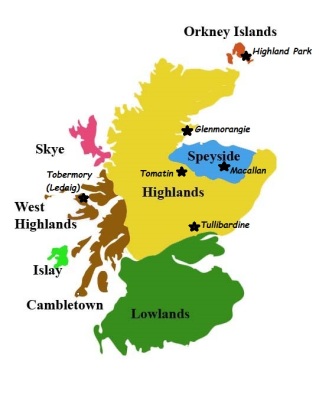 Scotch drinkers will often associate certain regions with specific flavour profiles, though this is becoming harder to do now with all of the experimentation happening with Scotch distilleries, and can be nearly impossible with a region as large as the Highlands.  A huge area, particularly if you include the Speyside region, the Highland distilleries are situated across vastly different geological areas with different climate influences, and this comes across very clearly in the distinctly different characters of its producers’ malts.

Alright, alright… Enough preamble.  What did we taste?

We tasted six scotches in total, and while not necessarily overly exotic or hard to find, they did a good job of illustrating how greatly different the distilleries within a single region can be.

Nose: The nose was immediately fruity with heavy caramel.  Adding a little water brought it into better focus for my nose, smelling more like fresh pear and apple with a little hint of chocolate.

Taste: Again, fruity… Pears and honey with some raisin and vanilla in the background.

Finish: Moderately long and soft, with the chocolatey cocoa notes from the nose coming through, and a bit of peppery spiciness.

Overall: I really, really want to like Macallan more than I do.  This is the third or fourth expression I’ve tried, and maybe if I had experienced Macallan before they started with this Non-Aged Statement line of whiskies I would enjoy it more.  All in all it’s decent enough, but as I always tend to think with the Macallans I’ve tried: “I can do better for the money”.  Score:  81/100

Nose: Heavy fruit… I really do love this nose!  No surprise given the Port barrel finish, there’s lots of fresh red fruit: think cherries and red wine grapes.  Notes of sweet vanilla are there are as well, but it’s really the fresh fruit that leads the way.

Taste: Quite sweet, and a little more intense than our Macallan tasting.  The cherry fruit is still there, though it’s more subdued than the on the nose.  Sweet caramel and malty notes lead the way, with the cherry fruit notes taking a back seat.

Finish: Not quite as long as I would like, but not short either.  It’s a sugary finish, no real spice to speak of, with a hint of that slight bitter/salty maritime character present in the base Glenmorangie malts.

Overall: I like this one a lot, and it’s a bottle I already own at home.  The base Glenmorangie 10 year old is a malt I enjoy with some regularity, and its character is certainly recognizable here.  I tend to favour malts with heavy fruit influences, and a little sweetness, so this really hits my wheelhouse.  The slightly higher ABV also gives it a little extra kick that prevents it from being a boring, cloyingly sweet dessert malt.  Score:  86/100

Nose: Light nose, with notes of honey, apple and peach.

Taste: Light sweetness, with hints of oaky vanilla, and a surprisingly pleasant mouthfeel.  Toffee, apricot, green apple and cinnamon round out the palate.

Finish: Not one I would describe as long by any stretch, but more than I expected.  Fades into a slightly peppery, oaky finish.

Overall: This tasting confused me a little bit… I have vague memories of trying Tomatin 12 once before and thinking it was absolute schlock.  Granted, batches of the same whisky can vary greatly, but this seemed like a whole different animal to me.  I would never describe this as a great single malt, but for its price and assumed target market I was pleasantly surprised at how well it held up.  I don’t think I’ll be buying a bottle anytime soon, but if someone offered me a dram I wouldn’t say no.  Score:  74/100

Taste: Creamy mouthfeel on the palate, with a jammy sweetness.  Sweet vanilla, with the same apple and pear notes described on the nose.

Finish: Disappointing finish, given the intensity of the nose and palate.  Still, sweet and fruity, finishing with the same vanilla note throughout.

Overall: I’ve only tried one or two other whiskies that had been finished in sweet wine barrels (such as Sauternes), and I didn’t particularly care for them.  I like a touch of sweetness to a malt, but those finishes tend to add too much for me (yes, I am a delicate flower).   That being said, I enjoyed this particular wine finish more than I expected.  The sweetness is definitely still prominent, but it’s balanced well enough to not be cloying.  I would really like to give this Tullibardine bottling another try before making a final call on it, but for now…   Score:  79/100

Nose: Peat, peat and more peat…  Trying to get beyond that, there is a delicate floral quality, maybe something like iodine, and just an overall impression that leaves me with the sense of being… unfinished.

Taste: Medicinal and dry.  There is an underlying caramelly sweetness that doesn’t combine with the ashy peatiness on the tongue in a way that I particularly care for.

Finish: Again, heavily dominated by peat and its ashy smokiness.  The maritime saltiness comes through as well.

Overall: I’m not a lover of peat monsters to be sure.  A little bit is great (as we’ll see in the next tasting), but this is more than I particularly care for.  This is the fourth or fifth attempt I’ve taken at Ledaig 10, and I really want to like it, but it’s just not for me.  The certain bitter ashy quality to the peat smoke just doesn’t sit well with me when combined with the underlying salty caramel sweetness of the malt.  This is highly dependent on personal preference, but…  Score:  74/100

Taste: Suffers somewhat from the lower ABV, it’s gentle on the palate with those slightly spicy notes coming through against a background of vanilla and light smokiness.

Finish: Short with the smoke and vanilla fading quickly, leaving only a little bit of peppery ginger spice.

Overall: This was a tough one to taste after trying the Ledaig.  I’m a big fan of anything Highland Park, though I wish we had finished something with a little more “oomph”, even if it was just the 12 year old.  Still, though perhaps slightly weak at 40% ABV, the Highland Park 10 Year offers a very strong, enjoyable, quality product and a very reasonable price point.    Score:  82/100

There we go… Six Highland malts, from all around the region.  And yes, I realize that Macallan is located in Speyside, but that’s technically a sub-region of the Highlands (and in fact Macallan describes itself as a Highland Malt on its packaging).  It was definitely an evening put together with the novice Scotch drinker in mind, but provided enough interesting background information and breadth of drink choice to keep even more experienced enthusiasts engaged.  If I had one small critique it would be that the Ledaig should really have been the last malt sampled, so as not to wash out the flavour profile of the Highland Park.

Still, I had a lot of fun at the event and am looking forward to the next tasting hosted at the venue!

Published by The Green Malt

View all posts by The Green Malt